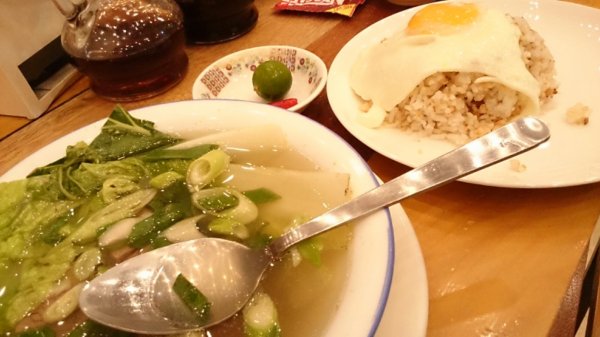 It’s 3:00 in the morning and I swear not too long ago this was the time I would just be on my way home from a gig or a night out with the boys. I find myself in a now brightier more commercial Tapsi Ni Vivian in Tuazon Ave. Marikina. Though the place does look more appealing it doesn’t lose its flare for food nor the characters that fill the tables in this 24/7 “panghimasmas-bago-uwi”.. Nightspot.. Or should I say.. Early morning spot..

You have your poker players most looking like they lost the world and a few feeling like they’re on top of it.. Treating the gang. Then you have your typical all male testosterone filled barkada.. Trying their latest pick up lines on the next table.. Which happens to be bar girls with their manager who have just finished work in the nightclubs around. You can tell a lot just by sitting and observing as your free to seat in this iconic place this side of town good for one or twenty one.

I’ve been on a bulalo /nilaga spree the past weeks and this is no day to let down on my streak. I ordered Nilaga.. Which would usually mean Nilaga Baka or Beef Shank Soup in broth. I’m surprised they offered NILSILOG.. I was starting to think of the taste and the texture of food in my head ad how the flavours would lead up to..

Time to get adventurous… I just don’t know how nilaga would taste with fried rice.. And with fried egg to boot. It’s like you’re suppose to order a a strong dish match it with mild sidings or starch. Not this morning.I’m going all fireworks. I asked for 3 calamansi (kumkuats citrus) and siling labuyo for my dip..

I know it’s just tasteless of me and utterly baduy to order three-in-one coffee with my nilaga.. But that’s just me. The disk arrives and as expected.. The festival flavours of brothed tender beef, leafy veggies, chilli citrus fish sauce, runny fried egg on fried rice may just be too much on the pallette. Specially if you take in a few spoonful sips of warm beef broth to go with it.

These 24/7 bulalo houses have their own secret “bulalo since the beginning of time” concoction. It’s.just tasty.. MSG lightly present though.. But still beefy.. And UNLI! Yep you could have as much as you want
. Unlike those joints in the now snobbish tagaytay district when you can no longer ask for extra soup.

It’s 3:58 in the morning.. And I’m now seeing runners.. Cyclists and families coming in.. And a new day begins this side of town where the sun shines first only in the east.